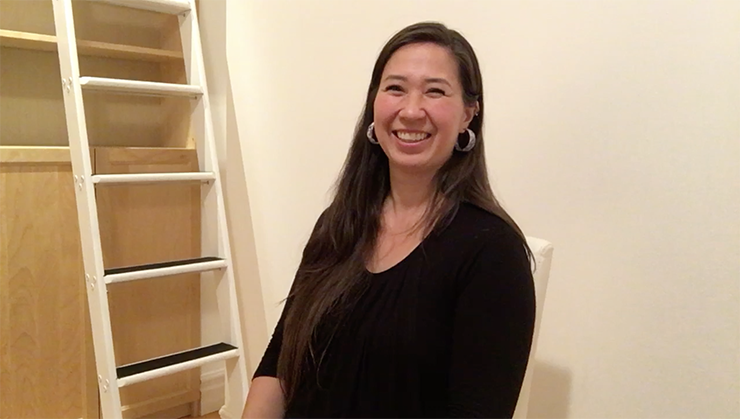 I’m from Canada, but my mother immigrated from Japan, and my father from Serbia. My parents taught me Japanese and French respectively. Until I was ten, I lived In Quebec, where French is the official language, and then came to the capital, Ottawa, where both English and French are the official languages. Right now, I work as an English-French simultaneous interpreter at the Ottawa Congress while raising my children, who are one and four years old.

In Ottawa, when asked, “What’s your mother tongue,” they’re usually asking which you’re better at, English or French. But for me, neither is the case, so I’m unsure how to respond. I usually respond that “mother tongue” has the word “mother” in it, and I speak both Japanese and French at home, but my primary language is English. As a simultaneous interpreter, I received training to interpret from both English and French, and I have co-workers who speak Spanish, German, and other languages as well. I grew up surrounded by language, and feel comfortable being surrounded by language at work as well.

It was only natural that I spoke Japanese

When I was a child, my lullabies and picture books were mostly in Japanese. So even now, when speaking to my own children, words like “Come here,” come out naturally in Japanese. When I get mad though, it comes out in English (laugh). Since I was in elementary school, I attended supplementary school on Saturdays, and studied there through my third year middle school.

As a child, it was only natural that I spoke Japanese. I apparently even asked why studying the language was necessary. My mother’s response was, “You’re half Japanese, so naturally, you should be able to speak the language.” My mother is also an interpreter and translator, so she was very adamant about me learning languages.

Even as an adult, it’s natural, because I’ve been speaking from a young age. In the past, my Japanese fluency level has gone up and down, but after living in Japan and starting to raise my children, I decided I need to take it more seriously. For some reason, I have quite a complex over feeling the need to speak Japanese like a normal Japanese person. By, “like a Japanese person,” I mean someone who was born and raised in Japan, can write kanji, and do work in Japanese. Part of that’s likely due to the fact that I’m an interpreter and therefore working as a professional in language, but it’s also me just thinking that my grasp of the language is incomplete, while at the same time knowing that I don’t really have the will to take studying Japanese seriously. It’s like I have the two contradicting feelings of having a complex, while also thinking, “Whatever, this is fine.”

My experience in Japan

As a child, I would live in Japan for a month once every four years, but the only time I’ve lived there as an adult was when I worked as an English teacher for two years. Thinking back on that time, because I was half Japanese and understood Japanese, I feel like I was searching for something different from those who go to a completely different country and find their new environment interesting. Up until then, I thought of Japan as my mother country, but I wanted to try seeing Japan from a different perspective than I had as a child. Other half-Japanese people I know have also gone back for a year or two. All of us feel the same way, and are seeking something. I don’t know exactly what that something is, but it’s something we want to experience.

I lived in Japan 12-13 years ago, but I remember feeling like I stuck out. Kids would point at me and shout, “Foreigner!” and I’d internally think, actually, I’m half Japanese~! Back then, we didn’t have GPS, so when I stopped someone on the street to ask for directions, I’d have to ask three times before getting a response. I thought it was unfortunate that people rejected me based on my appearance. I didn’t want them to be so afraid of me.

When I returned to Japan this past summer, we went to a bakery and my four year old son said, “I want melon bread!” The man at the bakery responded, “You’re speaking Japanese, even though you don’t look like you should be able to!” (laugh) I know that thinking like this is common, and there’s not all that much I can do about it, but I can’t help but think that it’s so old-fashioned! How should I explain this to him…? It’s the 21st Century, please get used to it? There’s times I want to say the same thing to Canadians too. Remind them that it’s the 21st Century.

Please don’t be frightened. The people speaking to you are doing so because they need help, or because they want to learn a little about something. I feel that Japanese people have a bit of a complex about languages, like about how they did poorly at English in school. But communication between real people is completely different. However, it’s also true that there are cultural differences to take into account. For example, going to a party in Serbia feels completely different from a party in Japan. I understand that this may be why Japanese people struggle when spoken to aggressively, but I still wish more people would find these opportunities interesting and try to speak to us, or even if initiating conversation isn’t possible, at least not run away when spoken to.

I want to pass on Japanese to my children as well

My children speak French with my husband, and Japanese with me. I’m looking forward to them beginning to attend Ottawa’s Japanese school in September. As a parent, I feel a little nervous because all notifications from the school will be in Japanese. I understand the culture quite a bit, but I don’t have the same experiences as a Japanese person who was raised in Japan and moved to a foreign country. I also never attended elementary school in Japan, so don’t quite know how I can contribute.

My mother did her best to get my Japanese up to a level I could use in college, but I don’t actually know how much I can do. But I also want to be able to speak Japanese with my children. Yet I still can’t help but feel uncertain, because I’ve already had to look things up or ask a friend for help when encountering unfamiliar cooking terms in my childrens’ textbooks. But I still want to be able to speak with my children as much as possible, because I think language is very important.

In addition to that, I believe language is crucial to my children as individuals. My own children are only a quarter Japanese, but from a white person’s perspective, I’m seen as Asian. And so they ask me, what kind of Asian? Can you speak the language? Japanese is part of my identity, so my response is natural. But my children are a quarter Japanese, so they’re instead asked, why are you speaking it? I think it’s crucial to interact with all kinds of languages in order to understand all kinds of ways of viewing the world, and knowing that, I feel motivated to keep working on Japanese with my kids.

Nowadays, there’s children from all over the world at school, and these children likely all speak different languages at home. So I don’t think it’s as unique as it was when I was little. I want being multilingual to become the norm in the 21st Century.