What I, a returnee, can do to help 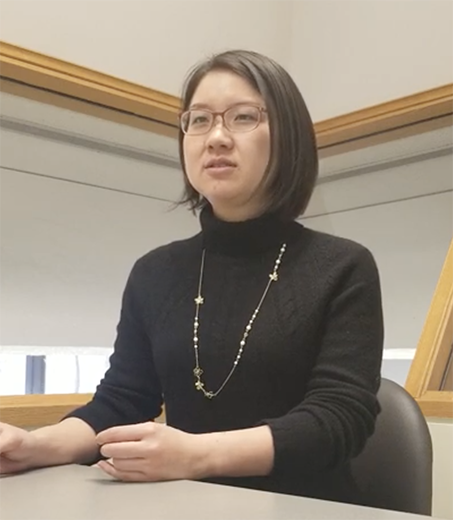 I was born in Japan, and when I was seven months old, we went to America because of my father’s work. I was raised in New Jersey until I was 5 years old. We used Japanese at home, but the local preschool was all in English, and as a result I had to divide my usage of both languages. After that I returned to Japan, but went to the States again when I was in fifth grade in elementary school. This second time I lived in America, I had already forgotten English and had to relearn it at my local elementary school. I returned to Japan again in my second year of middle school, and entered a school that accepted returnees like myself. From there, I remained in Japan and graduated from college there.

I consider Japanese to be my native language, but after entering the work force, my colleagues and other people I encountered made me realize that my Japanese differed from that of others. After graduating college, I was an English teacher at a high school, but currently I work in Canada, supporting international students who have come to study abroad. The students I work with aren’t just from Japan, but also Mexico, Italy, Spain, Germany, and a variety of other countries. Their levels of English proficiency are just as varied; some are native English speakers, while others are complete beginners. I’m fascinated by this job that allows me to act as a bridge between the various cultures of the students and Canadian culture.

It’s difficult to find the words to express oneself.

At first, even though I attended the local elementary school, I couldn’t understand what the teacher was saying, and didn’t even understand what subject I was supposed to be studying. But after three years of living there, my English improved, and I was even able to get good grades. It even got to the point where I would argue with my younger brother in English, but that’s when I began to forget Japanese. I spoke Japanese at the supplementary school I attended, but was forgetting more and more kanji and expressions, and felt a growing sense of urgency that this was bad. I especially struggled to find words to express myself, and felt caught between having both half-baked Japanese and half-baked English.

I felt that my progress just, stopped.

When I went to America again in fifth grade, I felt that all of the progCaress I’d made through Japanese just stopped. I’d start progressing in English again from there, and there was a gap between the two. For example, in science class we learned the word “volcano.” I knew this word in English but not Japanese. When I temporarily returned to Japan and took a test on Japanese history, there was material didn’t know and kanji I couldn’t read. I was shocked.

So you can speak Japanese? And you’re “going back” to America?

On top of that, I hated when my classmates would say, “What? So you can speak Japanese?” or “Say something in English.” I was embarrassed, and still stunned that I couldn’t do as well as everyone else. The school I’d returned to was the same place I’d been at until fourth grade, and I thought oh, I was only away for two years, and this is how they treat me. I’d heard about “how returnees are treated,” but it was different experiencing it.

Even when I first returned to Japan when I was five, I didn’t have any problems with language, but still felt some discomfort. When I said I was moving to America in fourth grade, they said, “Oh you’re going back to the States,” and I remember thinking, am I “going back?” Am I really?

In Japan, I don’t recognize words and expressions that normal people know.

Sometimes there are words and expressions that feel specialized or uncommon to me, but those around me respond with, “What? You don’t know this?” My parents and younger brother also teased me about this. After becoming a working adult, people would also point out that, “Your particles are a little off.” I run into things like this during conversations, and when I’m not familiar with a word and ask something along the lines of, “What’s that, something from your dialect?” they’d respond with, “What? It’s not a dialect thing!” But it was still so out of the blue to me, and I couldn’t recognize it at all.

Regarding the written word, after beginning to work I asked people to, “Tell me if my Japanese is odd,” so sometimes they’d point things out. I was told that my particles and word ordering are “English-like.” For example, when I use words like “all,” or “basically,” my placement for them in my sentences is apparently completely like English.

I guess it’s alright in the end, because everyone would say, “Oh, it’s because she’s a returnee,” and laugh it off.

When I was a teacher at a high school in Japan, I had the opportunity to be the homeroom teacher of a returnee student. Because I understand the struggle of not being able to express myself with words, I wanted to help ease as much stress as I could from those who were in similar situations. I feel that people in Japan often approach those who don’t speak Japanese with a, “What’s wrong with them?” kind of attitude.

For example, sometimes the media picks up stories about the struggles of foreign employees working in convenience stores. When I personally approach them, I intentionally try not to give off the same kind of judgmental vibes. I’d had to struggle with not understanding Japanese as well, so when I was the homeroom teacher of the returnee student, I’d add the hiragana or Romanized readings to kanji, or try to explain in simpler words.

Even though you speak the Japanese language, they don’t see you as a Japanese person

Japanese people don’t really see you as Japanese, even if you can speak Japanese. From my own experiences, if my intonation’s a bit off, or my phrasing’s a bit odd, no one will mention it directly but I still feel as though I’m being watched. I suspect foreigners who live in Japan have also felt the same thing. The media gives off the same feeling. There are celebrities who sell themselves as being half-Japanese, but I think in the end, I don’t think they’re perceived as actual Japanese people.

English that is “taught in Japan,” and “actually used”

I personally was never really criticized for my Japanese, but when I was an English teacher, I remember being told, “Oh, because you’re a returnee,” by my fellow English teachers. For example, when writing tests, I’d think, “People don’t actually say that in the States.” But many of the other teachers believed, “This English is for their exam, so this is how we have to teach it.” We got into debates. There were also times when I was glared at for speaking English on the train.

So basically, even when it comes to English taught in Japan, there’s a specific, “English that WE teach”?

Exactly, and this was quite a shock to me. In contrast, in Canada, even if I mess up my English grammar, the listener completely ignores it and keeps listening. Their stance is that it’s fine as long as you get the meaning, and I feel this is a bit different from how English is perceived in Japan.

When I was the homeroom teacher of the returnee student, I was really glad that I was able to communicate how to be considerate of their situation to the other teachers. I did things like asking the Japanese teacher to tell the student in advance which sections to prepare if there was a reading aloud exercise, and to not erase things on the blackboard right away, but rather leave them up until break time.

I felt I was able to create an environment where the student could study at ease. But I think this is something that ESL (English as a Second Language) teachers in Canada do all the time. I often hear from high school students studying in Canada (who aren’t native in English) that teachers have given them extensions for their tests into lunch, have allowed them to bring their tests home, and have allowed them to use dictionaries. I think I was able to show the returnee student in Japan the same consideration.